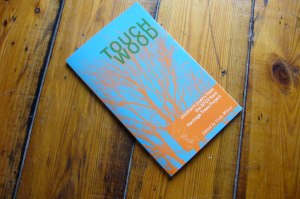 The project began with a series of workshops to support The Conservations Volunteers’ project to map and preserve Kent’s old, large or interesting trees at Reculver CE Primary School, Whitstable Junior School and Great Chart Primary school. The idea was to stimulate the children to write poems that explored the myths associated with trees and woodland and raise awareness of their importance. This was combined with an open call for submissions that went out to Kent primary schools and visitors to The Conservation Volunteers’ Singleton Environment Centre. It was then a question of selecting which poems to include in the book.

The poems and illustrations produced by the children showed a high level of craft, imagination and observation, as well as a commitment to preserving our woodlands. No matter what kind of exercises or source material I use with children I find myself constantly surprised by the sophistication and invention of the work they produce.

You can buy Touch Wood from Amazon.